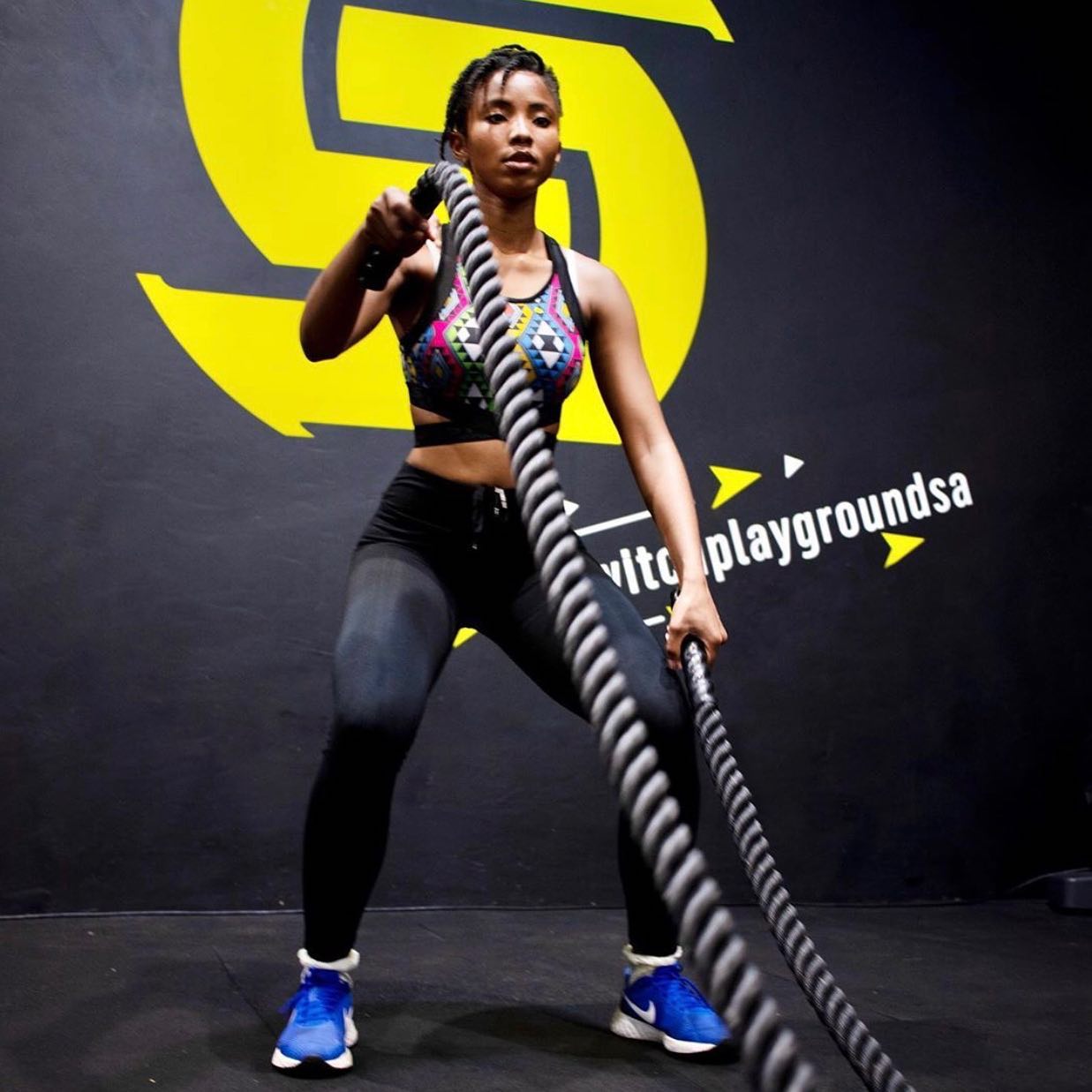 For a continent that has consistently produced the world’s best long-distance runners and where football is the most popular sport, few homegrown sportswear brands would have dared before to challenge the local dominance of NikeAdidas, Puma, and Under Armor — the most recognized and respected sportswear brands. Never before have the boundaries of what sportswear ought to look like have been so pushed as they have been in recent years by a new generation of culturally conscious fashion designers. While striving to have an Afro-centric offering, these entrepreneurs are heralding another sportswear revolution that is bold, brightly colored, symbolically patterned and inspired by their heritage.

And the COVID-19 pandemic had everything to do with it.

In 2020, the apparel trade was one of the worst-hit industries. Considered a lifestyle sector, a freeze on all shipments led to a slump in the international apparel trade. At the same time, more individuals became more health conscious with many turning to walking, running or working out at home. This shift in consumer behavior due to nationwide lockdowns, coupled with a decline in purchasing power as businesses closed down and a spike in unemployment rates saw a shift in consumer tastes. This accelerated the pervasive wear of a recent fashion trend: Athleisure (a fashion trend of casual clothing designed to be worn both for exercising and general use).

The global athleisure market is anticipated to be worth it USD 662.56 billion by 2030, according to a new report by Grand View Research, Inc. Bringing this closer home, the Africa and Middle East sports apparel market is expected to reach $23190.43 million USD by 2029 according to an Industry Trends and Forecast report by Data Bridget market research.

Similarly, the global athletic footwear market size was worth $71.18 billion in 2021 and grew to $76.72 billion in 2022 according to Athletic Footwear Global Market Report 2022 published in August.

African sportswear brands have been around since the mid-nineties. They have just not been as boldly colorful and culturally conscious as they are now.

Sportswear that is more bold, patterned and colorful

It all started with the Ankara fabric.

In the mid -20oo’s, an Ankara fabric ripple started. Previously known in the East African region as the Kitenge, the Ankara is one of the most enduring and widespread clothing materials from West and Central Africa: a distinctively colorful and elaborately designed 100 percent cotton fabric commonly referred to as the “wax hollandaise.”

Despite Ankara’s controversial origins as not a ‘truly’ African fabric, it has come to be that color, look and feel that is instantly recognizable as ‘African.’ The late 2000s saw a revival of these bold, wildly colorful and symbolic Ankara-patterned fabrics whose designs are now stitched on every aspect of fashion from apparel to furniture across the globe.

Although the first African sportswear brand — capestorm, a South African-based sports apparel firm focusing mainly on outdoor wear and sportswear — was started in the 90s, it was not until the mid 200os that companies began popping up from South Africa, Nigeria, Kenya and Botswana with unique bold patterned and vibrant colored apparel, sneakers and trainers, inspired not only by the Ankara fabric but also by Nguni from South Africa, Kente from Ghana and the Mud Cloth from Mali — all distinctly unique fabrics with their own set of colours, patterns and textures that are quickly becoming a preferred alternative by local consumers to global brands.

These are some of the brands shaking up the athleisure industry by adding their own cultural touch.

Lornah Sports African Sportswear: When former Kenyan World Cross Country champion Lornah Kiplagat launched her female sports brand Lornah seven years ago, she became the first African sports personality to achieve such a feat. The company, founded in 2015, focuses on authentic and unique African-inspired sports apparel appealing to women with a keen interest in sportswear, including shorts, shirts, sports bras, tights, jackets and running dresses. The names of the clothing items on her catalog sold through her online shop and distributed globally such as ‘twiga tights,’ Barika Sports Bras, Kito Capris, and Mumbi long sleeves, inspired by names from various Kenyan names and Kiswahili.

Enda: The country’s first running shoe company was founded in 2016 by Navalayo Osembo and Weldon Kennedy. The company has its eyes set on the global sports shoe brand market. their catalog includes the Lapatet — a Kalenjin name that means “running,” and Iten — the name of a town in Kenya where the best long-distance runners in the world are trained.

AFA Sports: This company was founded in 2017 by former college athlete and NBA agent Ugo Udezue, AFA Sports (AFA means Africa For Africa) is a Nigerian company that designs, develops and manufactures sports merchandise and apparel.

While speaking to Al Jazeera in 2021Udezue spoke of how ‘stumbled’ into “to pioneer the first and only African sports apparel company to officially outfit a team at the Olympic Games in Japan this year.”

“I came back to Africa with the idea of ​​starting a continental league that would match the NBA. When we started the league I noticed that the basketballs were very slippery because they were made for air-conditioned gyms and we all know that there aren’t too many of those in Africa,” Udezue explained,”so I went to China and developed a ball that absorbed sweat and immediately we witnessed less turnovers in the game as a result.”

AFA sports ships to 20 countries and has received endorsements from some of the well-known homegrown celebrities. In 2020, AFA Sports became the first African-based brand to sponsor and kit a national team at the Olympics, after securing the opportunity for the Nigerian women’s basketball team.

RuvaAfricaWear: This lifestyle brand has been operational since 2015 in Zimbabwe to ‘celebrate African history and heritage through everyday functional clothing. It incorporates prints from different African countries. The acronym RUVA stands for Responsibility, Unity, Value Creation and Appreciation. Another meaning of the word ‘ruva’ is ‘flower’ in Shona, one of Zimbabwe’s local languages. The founder Sylvester Ndhlovu chose the name to symbolize beauty, compassion, friendship, humility and passion. and other positive symbolisms associated with Africa.

CultureFitClothing: The company was founded in 2017 by a group of entrepreneur friends of West African and black descent who, brought together by their heritage, their love for travel and their interest in wellness, set out to create what they consider “a high-performance activewear for the culturally conscious woman.” Their vivid prints stand out in their catalog of yoga mats, leggings, and sports bras.

Zawadi Sports: This fitness brand specializes in unique African-printed Athleisurewear, activewear and swimwear whose prints are inspired by the Ghanian Kente, the Malian mud cloth as well as the Maasai shuka.

Pfeka: Though not inspired by the Ankara but instead by African wild animal prints, this is a Zimbabwean clothing brand that was founded in 2018 by Eglet Nyabvure. A former engineer and a strong supporter of being authentic and true to himself, Nyabvure, who now is now living in the Netherlands, is looking to give everyday clothing value by embedding African prints and patterns. The Pfeka trademark black and white jerseys have become a symbol of national pride. They were worn by professional tennis players Benjamin and Courtney Lock during their winning match at the Drácula Open 2022 doubles in Puerto Cabello.

Republican Siko: Just like Pfeka, this company equally draws its inspiration from its founder’s heritage — the Nguni print from Zululand. Founded by Jabulile Gwala in 2018 as a proudly South African athleisure wear, it was borne out of frustration.

While speaking to True Love magazine in 2020, Gwala said,

“At the time, I was enjoying the gym and loved dressing up for it. However, I was struggling to find clothes that were comfortable, with a Nguni print on them. So, I decided to create something that was tailored for African bodies with a print that represented my tribe.”

Richard Wanjohi contributed to this article